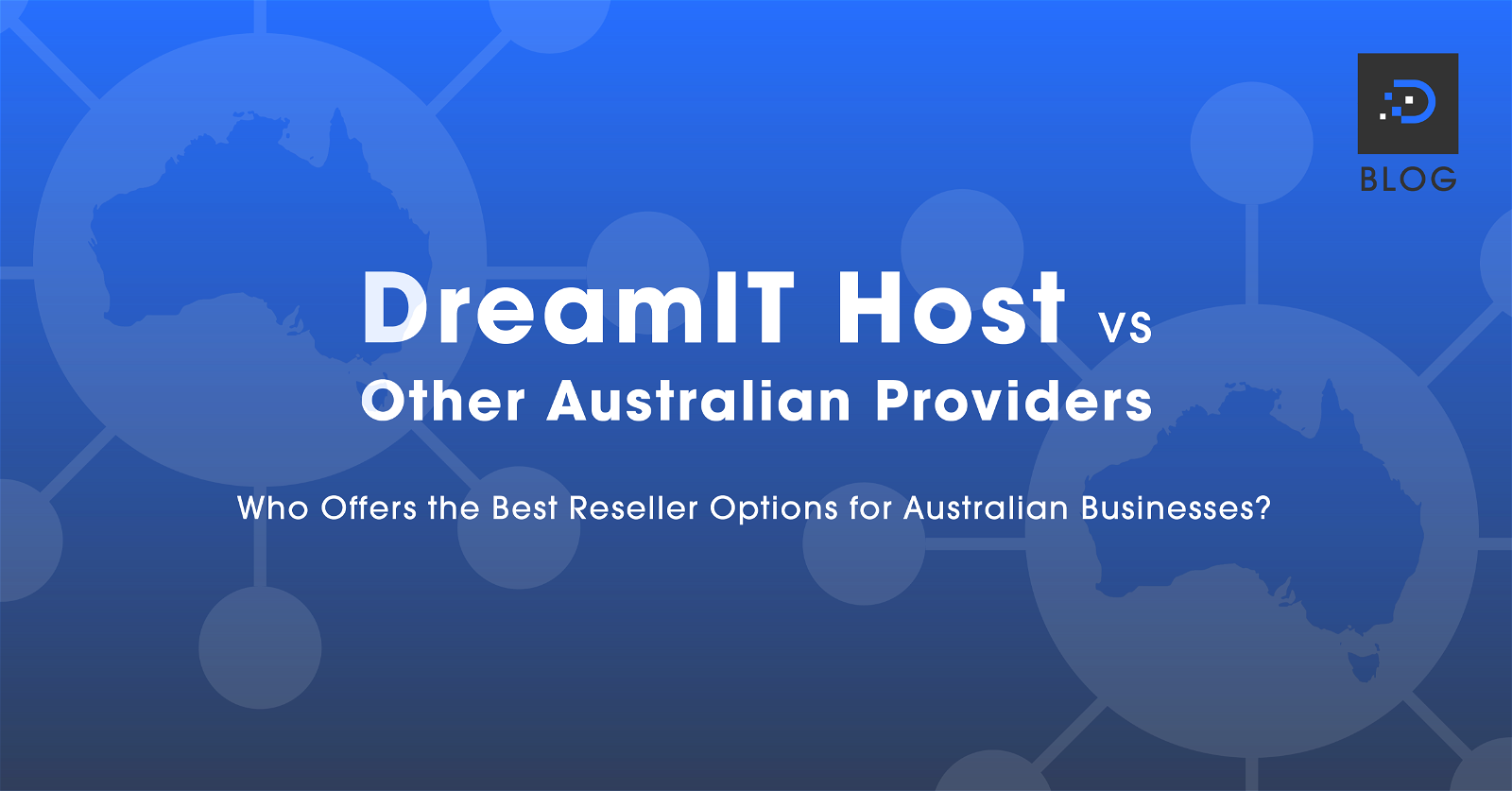 DreamIT Host vs Other Australian Providers: Who Is the Best Reseller Host for Australian Businesses?

When it comes to Reseller Hosting in Australia, there are a number of Australian providers to choose from. In this blog post, we compare the ratings, prices, offerings and customer support for popular Australian web hosts, to see who is the best reseller host for Australian businesses.

DreamIT Host’s Reseller Web Hosting plans start from $17.97 per* month as you get 40% off your first invoice and can pay up to 12 months in advance. You will need to contact VentraIP to receive a quote for their plans. DreamIT Host offers RAID NVMe storage on all plans, which is 12x faster than SSD, and up to 300GB storage. VentraIP manages Reseller Hosting through its sister company, Synergy Wholesale. They use Samsung SAS SSD storage but their storage caps at 25GB unless a tailored solution is discussed with the company. Both providers offer free migrations, SSL certificates, unlimited bandwidth and 24/7 Australian support from their Melbourne-based teams.

Both web hosting companies offer 24/7 support to their Australian customers. However, GoDaddy’s support teams are located in India and the United States but DreamIT Host has a support team based in Australia, which offers better response times due to a lack of time zone issues.

DreamIT Host’s Reseller Web Hosting plans start at a rate of $17.97* per month. They also have other plans with more extensive features for design agencies. Net Virtue’s entry-level package comes in at $6.95 per month, with a full year paid up front. The intermediate, advanced and ultimate packages are $16.95, $26.95 and $36.95 per month respectively. DreamIT Host provides 15 RAID NVMe storage in its base plan, while Net Virtue offers much slower SSD storage in all its plans. Both options are Australian web hosts that offer unlimited bandwidth, 24/7 support for Australian customers, a 5 MB/s I/O Speed, and a 99.99% uptime guarantee.

It is also vital to mention for Australian businesses that DreamIT Host have Melbourne-based support staff who can provide 24/7 Australian support. Webcentral support teams are based in the Philippines, which can result in a lack of support at certain times due to time zone differences. The significant difference in ratings between the two companies also says a lot about overall customer satisfaction.

DreamIT Host is among the top web hosting companies for value and features in its Reseller Web Hosting plans. The starting package is $17.97* per month. That package includes 15GB RAID NVMe storage, 15 cPanel accounts and an I/O Speed of 5 MB/s. DreamIT Host also offers unlimited bandwidth, email accounts, and a 2GB memory limit. Crazy Domains has Australian hosting plans starting at $6.58 per month. These plans can rise to $11.83 and $19.75 per month, depending on the features desired. While Crazy Domains’ lower price points might be a more tempting option, they use very slow HDD storage for their lowest plan and regular SSD storage for all other plans.

Like Webcentral, Crazy Domains’ support teams are based in the Philippines, giving DreamIT Host a leg up with its local Australian support team.

Both web hosting companies provide 24/7 phone and email support and the promise of 99.99% uptime. Again, DreamIT Host’s Australian support is a positive vs. Digital Pacific, whose customer service is handled by teams in the Philippines. Rest assured with DreamIT Host’s higher ratings, you are more likely to receive faster hosting and better service.

To learn more about how DreamIT Host can support your business, read Australian Hosting for Small Businesses.